I returned on Monday night from my recent trip to Europe. While none of the cities I visited were new places for me, quite a bit of the material that I was teaching was new to me. It was the heaviest teaching & ministry load that I have experienced in my time with Prepare International, but it was also a beautiful demonstration by that Father showing Himself strong on my behalf!

I began my time in the Flemish Region of northern Belgium in the city of Ghent. My assignment there was twofold: 1) Teach and minister on the topic of “Principles of Leadership,” and 2) Facilitate the graduation ceremony of 6 students from the 3-year P.I. Training School.   These students have completed the necessary requirements and were “commissioned” as Kingdom leaders in their city! Two of the graduates, a husband-wife team, will be joining the current leadership team of the Ghent school (Robin Dhave and his wife, Kathlien) to form a new P.I. school, beginning in September of 2015. Belgium, perhaps more so than any other country I’ve visited in Europe, is desperate for passionate, educated leaders who can take a stand in their nation to see the Gospel taught and true disciples made.

On Sunday of my first weekend, I had the privilege of preaching and ministering in a church in Sint-Truiden, a city in the Limburg Region of Belgium. This church is led by Conley & Madelaine Annandale, who also lead a P.I. Training School in the Limburg Region. The Lord has been revealing a lot to me regarding the power of His presence in and around my life. I strongly felt His leading to preach in the church on that very topic – His presence. I desperately want to be like King David, a man who passionately “stewarded” the presence of God in such a way that miracles and the Kingdom was advanced, so that became a focal point in my message. I was thankful that He indeed showed Himself strong in our midst, and many came forward to receive ministry and prayer. Conley & Madelaine, in addition to leading the Limburg school and pastoring a church, are about to launch a brand new school in Sint-Truiden in January of 2015, with plans to launch another school in a border city in January of 2016. By the time that one begins, there will be a total of 5 discipleship and training schools in Belgium!

I traveled by train on Monday to Utrecht province of Holland, to the town of Bunschoten, where Volkert & Karoline Muijs (pronounced “mouse”) live with their family. As I have written before, Volkert owns a successful business and his wife is a corporate business consultant. Together they are a passionate Kingdom couple with vision to see the Kingdom overtake The Netherlands! Volkert currently leads two separate training schools in Holland, one in the town of Lisse, and one near his hometown, in the city of Amersfoort. I was tasked with teaching on “Making Disciples and Spiritual Fathering” in the Lisse school on Monday night, and “Holy Spirit and Gifts” on Tuesday night in the Amersfoort school. The content of the discipleship teaching was more inspirational in nature, calling for men and women to rise up and take their place as spiritual fathers and mothers in their city. By simply acknowledging the promises of salvation, each person has a story to tell, and thus, has the ability to begin discipling others! It was an exciting time together! In the Holy Spirit course, the sessions I taught were focused on explaining two of the types of gifts, the “motivational gifts” (those that excite us and come natural to us), and the “ministry gifts” (those that are given by God for serving the Body of Christ), as described by Paul in Ephesians 4 and 1 Corinthians 12. These two sessions, combined with the third session on “manifestation gifts” (those that come as a result of the work of the Holy Spirit’s power), provide a clear and thorough explanation of how God has chosen to use His children to advance the Gospel. To see the “lights” of understanding come on in the lives of the students, as well as the release of the Holy Spirit begin to emerge makes the travel and jet lag all worth it!

Following my time in Holland, I traveled to Southern Europe to the nation of Macedonia, where I spent three days alongside our partners Sasha & Maria Vuletic, planning and preparing for the two teams I will be leading there in 2015. We traveled MANY miles together across Macedonia and Greece in those three days! I am excited to share with you in a future post about the plans we have for these teams!

I wrapped up my time in Macedonia ministering in the Skopje school, led by Sasha & Maria, on the topic of “New Testament Themes.” As I was teaching, I could sense the power of the Holy Spirit in a tangible way as I taught on the Biblical truths of Justification, Adoption, Sanctification, and the New Covenant. In a nation so hungry for spiritual truth, it is overwhelming to witness the Father bring healing and freedom to His children! I sincerely wish ALL of you could witness the power of these times together!

I spent my final night back in Belgium before returning to Lubbock.   Peter Parthoens and his wife, Laura, live just outside of Brussels and have been a part of the leadership of the Ghent school for 7 years. Beginning later in 2015, they will be a part of leading a brand new discipleship school launched in the EU capital city of Brussels! We spent several hours together praying, dreaming, and discussing the new school and its enormous potential! God is indeed doing great things in Belgium, the target of years and years of specific prayer for revival. It is coming!

Dana & I are so thankful for you and your partnership with us. We simply could not do this without you. As the Scripture clearly shows us, the Heavenly rewards are equal for the “goers” and the “senders.” Thank you for making a decision to join us as we seek to fulfill the Great Commission and continually say YES to His calling! May you have a blessed Thanksgiving! 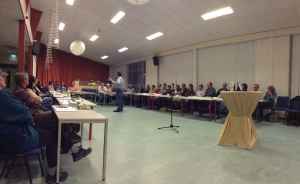 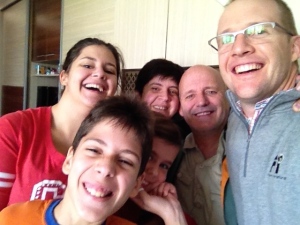 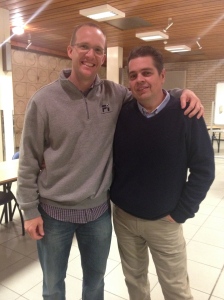 Posted on November 26, 2014, in Uncategorized. Bookmark the permalink. 1 Comment.