The week of Thanksgiving is truly one of my two favorite holidays of the year. Combined with Christmas a month later, this season is filled with memories of family gatherings of the past, and provides a perfect opportunity for us to give thanks for the faithfulness of Jesus Christ to us through all of life’s journeys. He is much better, much bigger, and more amazing that any of us can fathom! May our hearts be full of thankfulness and always remember to tell Him how much we love Him during this season!

I returned on Monday from a 12-day trip into the nations of Slovenia & the Czech Republic in Central Europe. While I had been to both of these countries previously, this particular trip was in no way like the others!

My good friend, Rick Betenbough, and I began our time in the city of Nova Gorica, which lies on the border of western Slovenia and eastern Italy. We had been asked to lead a weekend conference focused on success in business. While the event was organized by a local pastor, he wanted to attract a diverse crowd of both Christians and non-Christians, so the advertised name of the event was not overtly “Christian.” A small group of locals in gathered together in conjunction with a group of about 40 who had traveled from the capital city of Ljubljana. It was immediately clear to us that there was indeed a great hunger for Truth despite the many non-Believers in our midst! I opened the conference on Friday night with a teaching on “What & When is the Kingdom of God,” and Rick took the lead for most of Saturday, sharing the testimony of the success & failures of Betenbough Homes, and providing practical tools for business leaders on how to honor God’s Kingdom and raise up high-quality leaders inside of their organizations. If it weren’t for the time restrictions that day, I think the crowd could have stayed there for many more hours receiving and digesting the transformational truths that Rick provided! 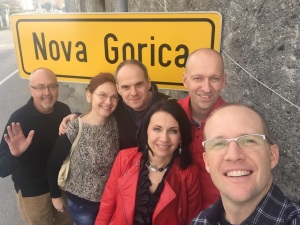 At the end of the evening, we gave an invitation to lay hands on and impart confidence and encouragement to any attendee who wanted prayer. Easily over 75% of them came forward, which led to all kinds of opportunities for the Holy Spirit to move among us – which He did in powerful ways! There was NO DOUBT that the attendees left with powerful business wisdom in-hand, and knowing that the Lord had touched their life in a tangible way! 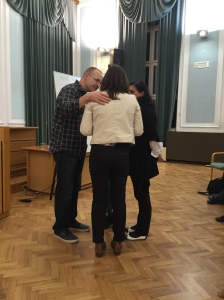 The following morning, we drove to Ljubljana where Rick had been asked to preach at a church (a first for him). Despite his insistence that he is “not a preacher,” I had to keep reminding him of the fruit of his labor! God clearly was using his humility and authenticity to impact the lives of both Believers and non-Believers in multiple settings. As demonstrated every day throughout our time together in Europe, Rick is a daily example of how the Lord will use a humble and submitted heart to do miracles and transform the lives of His people everywhere. 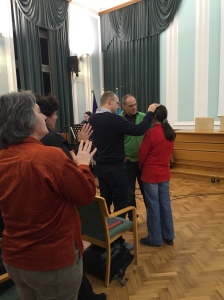 On Sunday night, we traveled back to Nova Gorica, where I preached at the local church led by Petr Bohm, a business-minded man, also the organizer of the weekend business event, and leader of the only non-Catholic church in the entire city. Upon providing an invitation for prayer following the Sunday evening service, we spent over an hour praying for various needs of the small congregation, which included 6-8 women who expressed a desire for physical healing. The first was a woman who was completely blind. While her sight was not restored, she experienced a scratchy feeling in her eyes while we were praying, and left encouraged that the Lord was doing something miraculous in her eyes! The next five women that we prayed for all experienced miraculous physical healing while we prayed! One woman waited in line almost an hour to testify to us that she woke up that morning to discover she had been healed of great physical pain following our prayer over her the night before at the business conference!   A non-believing (and quite angry) Catholic woman waited until the very end of the prayer time to come forward and ask us to pray for her. She, too, was in great physical pain on the left side of her body, and the power of the Lord healed her arm and hand while we prayed! Undoubtedly, she left that night knowing that Jesus Christ had touched her life!

In Venice with Petr & Rick

Rick and I spent the next two days with Petr (including one day in nearby Venice, Italy), encouraging him, and helping him build relationship with other business people throughout his city. Even though Petr is a local pastor, his heart is full of business ideas, and he is already working to create multiple small businesses in order to expand the Kingdom of God in the marketplace!

The second half of our trip was spent between the Czech cities of Prague and Jindrichuv Hradec. As I wrote in last January’s report, one of Prepare International’s longest tenured relationships is with Stanislav Bubik, a second-generation church planter in the Czech Republic. Rick Betenbough and I spent portions of two days with Stanislav in and around Prague. We had the surprise opportunity to travel to a suburb of Prague and visit with an up-and-coming homebuilding company, whose leaders have a great passion for the Kingdom of God! We spent several hours with this team that included some time of worship and prayer. Discovering a business with a Kingdom focus in Eastern Europe is definitely a rare find, and one worthy of our ongoing prayer efforts!

We then traveled to the southern part of Czech to the town of Jindrichuv Hradec, where Rick and I taught and ministered in the church-planting school led by our friend Stanislav. Our weekend topic was “Principles of Leadership,” another topic for which Rick is full of wisdom and experience! Approximately 30 men and women gathered together for a Friday night and all day Saturday training. I taught on some general principles of leadership in the Kingdom, and Rick again shared powerful truths and practical application from his many years of leading Betenbough Homes. The Lord’s presence was strong among us! Rick and I concluded our leadership course by joining Stanislav and laying hands on each attendee and praying over them. The Holy Spirit moved in powerful ways as we prayed and the worship team led us in singing. Three or four people in the room began to ask questions about a beautiful female singing voice they all heard, but it was later determined that the voice they heard was not that of anyone present in the room! It appears as though the voice of an angel was heard among us! What a joy it was to realize this!

Last Sunday was our last full day in the Czech Republic, and we awoke to snow falling outside! I preached at the local church in Jindrichuv Hradec, and we shared lunch together in the home of the local pastor. Both he and his wife are involved in small business in their city in addition to the work of the church, however, I would ask you to join us in praying for this couple and their marriage. They were extremely honest with us about some of the struggles they are facing in their family, work, and ministry.   Their names are Radim & Adela. They are parents to three children, including one special needs daughter. Thank you for interceding for them! Following our time with this family, we headed back to Prague in preparation for our early flight the next morning back to Lubbock.

As I have said so many times before, we are forever grateful for your partnership with us. You make it possible for us, and we are honored to represent you in Lubbock and in many nations throughout the earth! Thank you again, as I said at the beginning of this report, may our hearts be full of thankfulness and always remember to tell Him how much we love Him during this season!

Posted on November 28, 2015, in Uncategorized. Bookmark the permalink. Leave a comment.