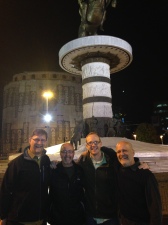 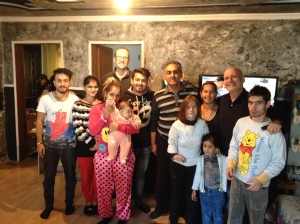 Greetings from Skopje, Macedonia!  Drew & I arrived here on Friday morning and were immediately off to a running start!  It didn’t take long for us to experience confirmation of what we already knew about our friends, Sasha & Maria Vuletic and their family.  Dana & I had the chance to spend a week with them at our family camp this past summer in Austria.  Randy & Drew have known them for several years now.  They are truly a family rich with God and His great love for others.  Everywhere we have been we witness the magic that happens when Sasha enters a room!  People are simply drawn to him.  His genuine, loving approach causes others to respond positively to him.  God has strategically positioned him in this capital city for great influence.

Friday evening we had our first session with the ministry training school that Sasha leads.  Drew spent about 2 hours teaching on some introductory principles of the topic of “What is the Kingdom of God.”  Saturday morning, we returned to teach and I had the opportunity to lead a 2-hour session in the Kingdom of God material, specifically on the topics of “When is the Kingdom, Revelations of the Kingdom in the Old Testament, and Culture of the Kingdom.”  There were about 15 students of all ages in attendance, one of which was a gentleman by the name of Ramadan who lives with his family inside of the gypsy community of Skopje (more about that later.)  These students have committed themselves to meeting every other weekend, eight hours at a time, over a two-year period to be trained and discipled in order to be equipped for reaching their nation and region for Christ.  In the U.S., most would think this type of extensive training is unnecessary, but Sasha made a statement that really captured my attention: “It is a mistake to not know what you believe.”  Because of the heavy Muslim influence here, it is absolutely necessary for Christians to know what they believe and why they believe it.  I’m just about convinced that America needs to adopt this as well…

The commitment to this two-year program is a heavy one for Sasha and his family as well.  They actually have two different groups going through the training (each at different points in the process).  One of the two groups meets one weekend, the other on the following weekend and so forth… In order to prepare for the teachings, Sasha spends a considerable amount of his time translating materials and preparing for the presentations.  Additionally, he has planted several churches, raised up the next generation of leaders, and handed them off.  The church he currently pastors is only 2-3 months old and is growing!

Saturday afternoon, Drew and I traveled by bus 2 1/2 hours southeast to another Macedonian city called Kocina.  This city is towards the Bulgaria border.  The landscape there was fascinating to me as I was recalling all of the places in Scripture that the nation of Macedonia was mentioned.  Some of the same soil in this area was walked upon by the apostles as they carried the Gospel in the years following Pentecost.  I tried hard to imagine what those days were like!  Seeing the sheepherders, farmers, and rows of crops was like stepping back in time.  Kocina is home to another friend of P.I., whose name is Venco, a pastor of a local church there.  We arrived on Saturday evening, expecting to go straight to his home.  Instead, a man who didn’t speak any English picked us up and drove us to the church, where Venco was awaiting our arrival.  He told us, “We have a youth meeting tonight. I will postpone my teaching so you can teach us tonight.”  I looked at Drew and said, “Good luck!”  At the time I was glad I could pass it off to him, but I was quickly reminded by the Holy Spirit that if I were alone on this trip, I would be the one getting ready to speak in that moment.  The Bible does say to be ready in season and out!  I received my on-the-spot invitation the next morning, however, when Venco asked me to stand up and give my testimony in front of the crowd just before Drew stood up to preach!  Following the Saturday church service, we had a wonderful traditional Macedonian meal cooked by Venco’s wife and then we were shown to our upstairs bedroom where the temperature was a cool 40-something degrees!  It was a COLD night’s rest.  We had another great lunch meal before Venco drove us back to Skopje, in time for Sasha’s Sunday evening church service where Drew preached, and I again was asked on-the-spot to share something.  I was ready for that invitation though!

One very amazing part about this particular trip is that our dear friends, Rick & Holly Betenbough, who had traveled this past summer with P.I. to our Austrian family camp and connected with Sasha & Maria, were here for 3 days.  They were part of a business conference and spoke in several church services in Poland (where Drew & I will be heading on Thursday), and when they found out we were coming to Macedonia, they agreed to stay in Europe a few extra days and meet us here!  They were with us at Sasha’s school and church in Skopje and they spent a lot of time with their family while Drew and I traveled to Kocina.  The four of us shared a tiny apartment together for the weekend!  For more reasons than I can even begin to type here, their friendship and partnership on this journey are a miraculous example of God’s redemption and great love.  He is bigger and better than I ever imagined.  He is truly amazing!  God is about to radically expand their influence all over the world.  They are two of the greatest Kingdom carriers I’ve ever met.

One of the most exciting things that Sasha & Maria are involved in is the local Gypsy community, in which approximately 70,000 people live (10% of the city population).  Maria helped start a preschool in the gypsy community about 10 years ago.  It was birthed out of one of the previous churches Sasha started, and is now an independent NGO.  Every other day, the school also hosts a feeding outreach program for the children living in the community.  In addition to food, they provide clothing to the children – as long as their parents agree not to sell the clothing given to their children.  In this community, many parents force their children to beg on street corners to try and earn a few dollars.  Despite the opportunity their children have to receive free, healthy meals several times a week, many parents would rather risk starvation for a few dollars. It truly is heartbreaking.  One of the men in this community is Ramadan (the man I mentioned above).  He is currently enrolled in the ministry training school that Sasha leads.   His father was an Imam – a teacher and leader of Islam.  In effort to try and buy influence with one of his neighbors, he bought a Christian Bible to give to them, but before he could present it to them, Ramadan picked it up and began reading it.  Instantly, it began to awaken something inside of him!  His father was highly critical of this and very upset, but it was too late.  Shortly after, he gave his life to Jesus and began serving Him.  Eventually, his father kicked him out of his home.  Right up through his final days, Ramadan shared Christ with his father, and just before he passed away, his father confessed Jesus as the “real God.”  He admitted that the Qur’an just had too many “holes” in it.  The Word is alive!

For all of you who have made it this far in the blog, I would like to ask that you prayerfully consider joining us at some point here in Macedonia on a short-term trip.  We have begun discussions with the Vuletics about helping them fulfill a great desire of theirs – to have a weekend marriage conference with both Believers and non-Believers alike!  They are hungry to have couples come and help them facilitate and share throughout the weekend.  In addition to that, we would have plenty of opportunity to minister in other areas and see some beautiful parts of this great country!  Stay tuned for more details.

One interesting note… On the flight to Europe, I sat beside the film director of the soon-to-be-released independent film entitled “The Unbelievers.”  Unfortunately, we didn’t strike up any conversation until the last 10 minutes of the flight.  I told him I would watch his film, though… Google it.  It definitely is an interesting project.

Thanks for your prayers!  God is good!

Posted on November 18, 2013, in Uncategorized. Bookmark the permalink. 2 Comments.